Are you a Warrior? 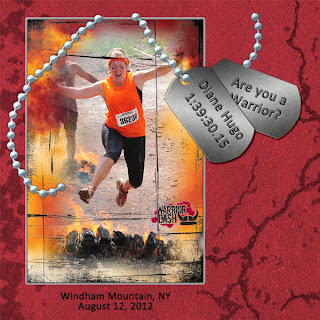 ...and loved almost every minute of it!  Warrior Dash claims it's "the craziest frickin' day of your life!"  Pretty darn close to it!  It is "3.2 Hellish Miles" up Windham Mountain, New York.  I am much more familiar with skiing down those runs rather than running up them.  Every half hour 600 runners (YES! SIX-HUNDRED) take off, through the flaming gates and up the mountain.  The Warrior Dash folks set up 14 obstacles at this Windham race.
Check out the little "Battleground" photos at
http://www.warriordash.com/register2012_new_york.php

Our group of seven had bright neon orange shirts.  No problem spotting each other!  My group pretty much left me in the dust (a.k.a. mud) right from the beginning.  That first 1 1/2 miles was pretty much up hill.  I quickly got
tired and, along with most everyone else, ended up walking up.  Even that was quite strenuous! Jim was a sweetheart and stayed with me.   :)  There were a few that were able to run it.  Maybe next year ~ I'll have to do more mountain training!

Even so, I did ALL of these obstacles!  Actually, there was no Capsized
Catamaran as the pond was too low.  Instead, we had to trudge through thigh high water and MUD!  I think some people lost their sneakers in the mud.  I was really worried about the walls we had to climb, but I had no problem with them at all.  All the running and weight training definitely helped in that respect.  I think I found the jump over the fire (Warrior Roast) the most intimidating.

My official time was 1:39:30.15.  Not too great, but no matter.  And that included a lot of waiting time in there for several of the obstacles.

I got my sister Barbara to take lots and lots of photos of everyone.  Having those bright shirts really helped!  I took a disposable waterproof camera along with me and tucked it in my clothes when doing the obstacles.  There were professional photographers (Sportphoto.com) at several locations along the course.  Some excellent shots from them!

If interested, photos (taken by my sister Barbara and myself) are at
http://www.photoshop.com/users/dianehugo/albums/515661dc5a65497a90acc6cafcea6094#page=13

Several days before the race I made up some scrapbook pages where I could just plug in a photo once I had one.  So here, you can just see how easy digital scrapbooking makes it to produce multiple pages quickly.  Once you have a basic template, just move the photos you want into the layout.
Here's a few examples:

and
[using Scrapgirls papers and elements]

These last two weren't exact photo replacements, but I still had a basic template to use, so it was very quick to rotate and alter slightly.  I made some up for everyone and was able to print them and provide everyone with digital files.  Love Digital!!

SkiChic
Highland, NY, United States
Hi and Welcome to my Blog! My name is Diane. My husband Jim (of 29 years) and I have a son - Kyle (24) and daughter - Kelly (21). I have been working for 35+ years, the last 25 as a Software Engineer in the IT world. My creative outlet started with Rubber stamping. I gradually added: Photography, Calligraphy, Book making/binding, Mixed Media Art, Jewelry making (both stringing and freeform peyote stitching). I found my Passion is ~ Digital Scrapbook Design! I love the creativity this allows. I hope you enjoy my designs and musings. Thanks for visiting!